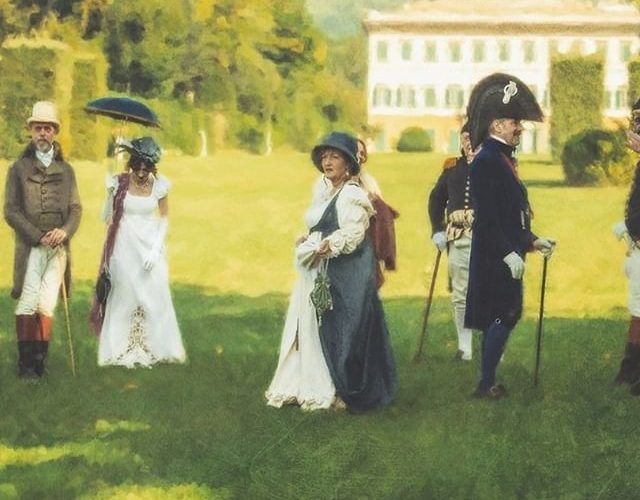 In 1806 the Princess of Lucca and Piombino, Elisa Baciocchi Bonaparte, Napoleon’s eldest sister, bought the Orsetti’s country villa in Marlia and had the gardens and

In 1806 the Princess of Lucca and Piombino, Elisa Baciocchi Bonaparte, Napoleon’s eldest sister, bought the Orsetti’s country villa in Marlia and had the gardens and villa transformed into her royal summer residence.

We invite you to visit the Villa Reale and its Park as it was in 1810 when Elisa, now the Grand Duchess of Tuscany, spent the summer there with a group of talented guests to keep her and her family company.

Turn back the clock and meet Elisa and her husband, Felix Baciocchi and their young daughter Elisa Napoléone and 100 historical re-enactors from around the world, dressed in Napoleonic attire from 1810, performing, historically informing and enjoying the magnificent park and the newly restored Villa Reale. Marlia will ring with the music and laughter of 200 years ago when it was an oasis of pleasure and calm during the hot Tuscan summers.

Hear Paganini play magnificently as he did that summer, attend a theatre rehearsal of “The Triumph of Love” by Pierre de Marivaux in the Green Theatre, discover the water games in Pan’s Grotto, marvel at the Tableaux Vivant throughout the Villa with Elisa and her ladies in waiting and other members of her court as they gamble and play cards and heatedly discuss the politics of the times. You can watch the 113th line infantry regiment training, watch a rehearsal of new choreography led by Elisa’s Dance Master, visit the archery lessons and fencing demonstrations in the park and play Blind Man’s Bluff on the lawn. Take a horse-drawn carriage ride around the park (at an extra cost) and follow the guided tour of the perfumed trees and plants planted by Elisa and later introduced into gardens all over Tuscany.

The 100 historical re-enactors will arrive in 2 pullman at 10am. The 2 pullman will return at 5pm.

The re-enactors will already be dressed in Napoleonic clothes from 1810. They will divide into 4 groups that will rotate during the day. The military re-enactors (10 soldiers and 2 officers) will train during the day in various locations around the Park.

From 1pm to 2.30pm all re-enactors will have lunch seated on the grass under the trees near the lake. For the rest of the day they will perform the following:

a) Dressing Elisa in the bedroom upstairs, with her ladies-in-waiting

b) Playing cards and gambling in the games room

b) Rehearsal of Marivaux’s Triumph of Love, in English

c) Trio and soprano recitals with music from the time

Perfumed Tour with guide and strolling around the Park

e) Blind Man’s Bluff and other games in the gardens

10 soldiers and 2 officers from the 113th line infantry regiment will train during the day in locations around the Park.
Between 1pm and 2.30pm the re-enactors will have lunch seated on the grass under the trees near the lake. 20 fold-up wooden chairs will be set up for the elderly guests (supplied by the re- enactors).
The food and drinks will be served as a Buffet Froid by Pasticceria Pinelli from Lucca on tables that they will supply. The exact location of the lunch to be decided.