The Camellias are one of the jewels in the crown of Marlia and are a great reason to visit Villa Reale. You can find over 40 varieties of Camellia japonica inside the Park, including some of the most characteristic varieties in the Lucca area.

Camellias, which originate from Asia, were brought to Great Britain in around 1730, but only arrived in Italy at the end of the century. At Villa Reale the first testament to the arrival of the Camellia japonica was a substantial delivery of botanical specimens, arriving in 1808.

Elisa Baciocchi had ordered her brother Giuseppe, the King of Naples, to arrange for numerous rare plants from the Palace of Caserta to be brought to the new ‘English garden’ at Marlia. Camellias began to propagate in many cities in Tuscany, finding suitable habitat and many enthusiastic growers.

The Camellia Walkways wind down the path of the stream, which had been out of use for many years until recently. The current owners decided to introduce new varieties of Camellia japonica, adding to the variety of colour in March and April when the camellias are in full bloom.

It is now one of the most picturesque and romantic areas of the park, most of all in March when the flowers are in full bloom. This area of the Park forms part of the Lucca Historic Camellia Exhibition.

To discover in detail all the camellias in the park, visit the dedicated section by clicking here. The digital classification and cataloging were carried out by the Camellietum Compitese of Sant’Andrea di Compito (LU) who helped us in providing a more complete service. While walking through the avenues of the camellias in the park of Villa Reale, it will be possible to frame the single cammelias QRcode with your smartphone and thus connect directly to the online form to find out their origin and characteristics. You’ll therefore be able to discover the beauty and originality of each camellia even out of season, simply by framing the code with your mobile phone.

Thanks to the collaboration with the Camellietum Compitese of Sant’Andrea di Compito (LU), it is possible to visit both the park of Villa Reale and the Lucca Historic Camellia Exhibition with a single cumulative ticket that can be used at Villa Reale for the whole month of March, even on different dates to visit the exhibition and the Villa. 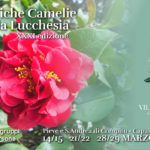